My own autumnal humour

Sidney Colvin publishes only brief excerpts from a very long (and romantic) journal-letter written by RLS to his friend Fanny Sitwell, one of the letters containing a full and intimate record of his daily moods and doings, which he is accustomed to send off weekly or oftener to her.

The expression ‘flowering isle’ comes from P.B. Shelley’s verses ‘Ay, many flowering islands lie / In the waters of wide Agony’ and ‘Other flowering isles must be / In the sea of Life and Agony’ (from the poem ‘Lines Written among the Euganean Hills’, 1819).

Sir Walter Grindlay Simpson (1843–1898), 2nd baronet of Strathavon and the City of Edinburgh, is one of RLS’s close friends.

[As usual, dots between square brackets indicate cuts made by Sir Sidney Colvin. For full, correct and critical edition of this letter, see Mehew 1, 145].

I have found another ‘flowering isle’ […]. All this beautiful, quiet, sunlit day, I have been out in the country; down by the sea on my favourite coast between Granton and Queensferry. There was a delicate, delicious haze over the firth and sands on one side, and on the other was the shadow of the woods all riven with great golden rifts of sunshine. A little faint talk of waves upon the beach; the wild strange crying of seagulls over the sea; and the hoarse woodpigeons and shrill, sweet robins full of their autumn love-making among the trees made up a delectable concerto of peaceful noises.

I spent the whole afternoon among these sights and sounds with Simpson. […] And we came home from Queensferry on the outside of the coach and four, along a beautiful way full of ups and downs among woody, uneven country, laid out (fifty years ago, I suppose) by my grandfather, on the notion of Hogarth’s line of beauty. You see my taste for roads is hereditary. Serpentine lines from William Hogarth’s ‘The Analysis of Beauty’, 1753
[http://upload.wikimedia.org/wikipedia/]

Friday. – I was wakened this morning by a long flourish of bugles and a roll upon the drums – the réveillé at the Castle.

I went to the window; it was a grey, quiet dawn, a few people passed already up the street between the gardens, already I heard the noise of an early cab somewhere in the distance, most of the lamps had been extinguished but not all, and there were two or three lit windows in the opposite façade that showed where sick people and watchers had been awake all night and knew not yet of the new, cool day. This appealed to me with a special sadness: how often in the old times my nurse and I had looked across at these, and sympathised. […]

I wish you would read Michelet’s Louis Quatorze et la Révocation de l’Édit de Nantes. I read it out in the garden, and the autumnal trees and weather, and my own autumnal humour, and the pitiable prolonged tragedies of Madame and of Molière, as they look, darkling and sombre, out of their niches in the great gingerbread façade of the Grand Âge, go wonderfully hand in hand.

I wonder if my revised paper has pleased the Saturday? If it has not, I shall be rather sorry – no, very sorry indeed – but not surprised and certainly not hurt. It will be a great disappointment; but I am glad to say that, among all my queasy, troublesome feelings, I have not a sensitive vanity. Not that I am not as conceited as you know me to be; only I go easy over the coals in that matter.

[…] I have been out reading Hallam in the garden;

and have been talking with my old friend the gardener, a man of singularly hard favour and few teeth.

He consulted me this afternoon on the choice of books, premising that his taste ran mainly on war and travel. On travel I had to own at once my ignorance. I suggested Kinglake, but he had read that; and so, finding myself here unhorsed, I turned about and at last recollected Southey’s Lives of the Admirals, and the volumes of Macaulay containing the wars of William. Can you think of any other for this worthy man? I believe him to hold me in as high an esteem as any one can do; and I reciprocate his respect, for he is quite an intelligent companion. 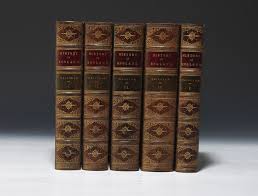 Th.B. Macaulay, ‘History of England from the accession of James II’, 1843
[https://encrypted-tbn3.gstatic.com/]

On Saturday morning I read Morley’s article aloud to Bob in one of the walks of the public garden.

I was full of it and read most excitedly; and we were ever, as we went to and fro, passing a bench where a man sat reading the Bible aloud to a small circle of the devout. This man is well known to me, sits there all day, sometimes reading, sometimes singing, sometimes distributing tracts. Bob laughed much at the opposition preachers – I never noticed it till he called my attention to the other; but it did not seem to me like opposition – does it to you? – each in his way was teaching what he thought best.

Last night, after reading Walt Whitman a long while for my attempt to write about him, I got tête-montée, rushed out up to M.S., came in, took out Leaves of Grass, and without giving the poor unbeliever time to object, proceeded to wade into him with favourite passages. I had at least this triumph, that he swore he must read some more of him. […] – Ever your faithful friend,

1 Response to My own autumnal humour