Children are certainly too good to be true

“Bonjour Philippine!” is the French expression used when someone eats twin fruits, or when two children accidentally pronounce the same sentence at the same time: the one who speaks first will gain next morning a little present from the other.

Mary Johnstone is the 8 years old American girl staying with her parents at RLS’s hotel.

[As usual, dots between square brackets indicate cuts made by Sir Sidney Colvin. For full, correct and critical edition of this letter, see Mehew 1, 210].

I lost a Philippine to little Mary Johnstone last night; so to-day I sent her a rubbishing doll’s toilet, and a little note with it, with some verses telling how happy children made every one near them happy also, and advising her to keep the lines, and some day, when she was ‘grown a stately demoiselle,’ it would make her ‘glad to know she gave pleasure long ago,’ all in a very lame fashion, with just a note of prose at the end, telling her to mind her doll and the dog, and not trouble her little head just now to understand the bad verses; for some time when she was ill, as I am now, they would be plain to her and make her happy. She has just been here to thank me, and has left me very happy. Children are certainly too good to be true.

[…] Yesterday I walked too far, and spent all the afternoon on the outside of my bed; went finally to rest at nine, and slept nearly twelve hours on the stretch. Bennet (the doctor), when told of it this morning, augured well for my recovery; he said youth must be putting in strong; of course I ought not to have slept at all. As it was, I dreamed horridly; but not my usual dreams of social miseries and misunderstandings and all sorts of crucifixions of the spirit; but of good, cheery, physical things – of long successions of vaulted, dimly lit cellars full of black water, in which I went swimming among toads and unutterable, cold, blind fishes.

Now and then these cellars opened up into sort of domed music-hall places, where one could land for a little on the slope of the orchestra, but a sort of horror prevented one from staying long, and made one plunge back again into the dead waters.

Then my dream changed, and I was a sort of Siamese pirate, on a very high deck with several others. The ship was almost captured, and we were fighting desperately. The hideous engines we used and the perfectly incredible carnage that we effected by means of them kept me cheery, as you may imagine; especially as I felt all the time my sympathy with the boarders, and knew that I was only a prisoner with these horrid Malays. Then I saw a signal being given, and knew they were going to blow up the ship. I leaped right off, and heard my captors splash in the water after me as thick as pebbles when a bit of river bank has given way beneath the foot. 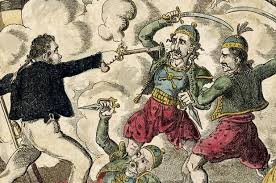 I never heard the ship blow up; but I spent the rest of the night swimming about some piles with the whole sea full of Malays, searching for me with knives in their mouths. They could swim any distance under water, and every now and again, just as I was beginning to reckon myself safe, a cold hand would be laid on my ankle – ugh!

However, my long sleep, troubled as it was, put me all right again, and I was able to work acceptably this morning and be very jolly all day […]. This evening I have had a great deal of talk with both the Russian ladies; they talked very nicely, and are bright, likable women both. They come from Georgia.

Tea was made out of a samovar, which is something like a small steam engine, and whose principal advantage is that it burns the fingers of all who lay their profane touch upon it. […]

After tea Madame Zasetsky played Russian airs, very plaintive and pretty; so the evening was Muscovite from beginning to end. Madame Garschin’s daughter danced a tarantella, which was very pretty. […]

Whenever Nelitchka cries – and she never cries except from pain – all that one has to do is to start ‘Malbrook s’en va-t-en guerre.’ She cannot resist the attraction; she is drawn through her sobs into the air; and in a moment there is Nellie singing, with the glad look that comes into her face always when she sings, and all the tears and pain forgotten.

It is wonderful, before I shut this up, how that child remains ever interesting to me. Nothing can stale her infinite variety; and yet it is not very various. You see her thinking what she is to do or to say next, with a funny grave air of reserve, and then the face breaks up into a smile, and it is probably ‘Berechino!’ said with that sudden little jump of the voice that one knows in children, as the escape of a jack-in-the-box, and, somehow, I am quite happy after that!