We have all been getting photographed

… and we haven’t found those photos… yet!

Madame Zassetsky is the Russian princess wintering at Menton with her sister and kids, in a villa near RLS’s hotel.

The first reference to RLS’s moustache.

[Dots between square brackets indicate cuts made by Sir Sidney Colvin. For full, correct and critical edition of this letter, see Mehew 1, 247].

We have all been getting photographed and the proofs are to be seen today. How they will look I know not. Madame Zassetsky arranged me for mine, and then said to the photographer: “C’est mon fils. Il vient d’avoir dix-neuf ans. Il est tout fier de sa moustache. Tâchez de la faire paraître,“ and then bolted leaving me solemnly alone with the artist. The artist was quite serious, and explained that he would try to “faire ressortir ce que veut Madame la Princesse” to the best of his ability; he bowed very much to me, after this, in quality of Prince you see. I bowed in return and handled the flap of my cloak after the most princely fashion I could command.

“Interesting group posed for a Daguerrotype by a friend of the family”. and “Interesting and valuable result”: vagaries of early photography, Punch’s Almanack for 1855 [http://upload.wikimedia.org/] 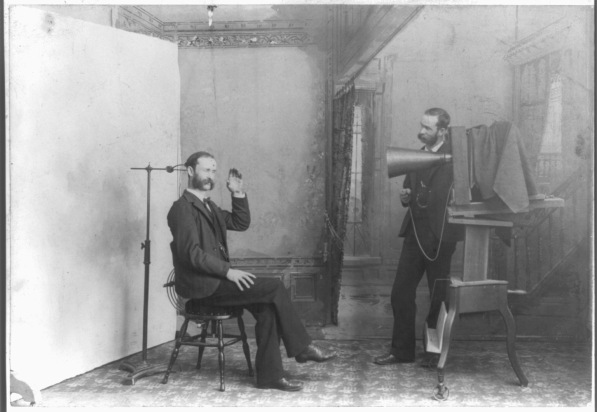 A photographer appears to be photographing himself: a satire on photographic procedures already becoming obsolete (note clamp to hold the poser’s head still), 1893 [http://signy389.files.wordpress.com/]