The future is thick with inky fingers

The Burns herein mentioned is the article undertaken for the Encyclopædia Britannica. In the end RLS’s work was thought to convey a view of the poet too frankly critical, and too little in accordance with the accepted Scotch tradition: the publishers, duly paying him for his labours, transferred the task to another author.

Allan Ramsay (1686-1758), author of the pastoral drama The Gentle Shepherd (1725), was a pioneer editor and populariser of Scots vernacular poetry.

Robert Fergusson (1750-74) was the Edinburgh poet acknowledged by Burns as ‘my elder brother in Misfortune, by far my elder brother in the Muse’ whose life ended tragically in a madhouse. RLS always felt a strong sense of kinship with him.

The volume here announced on the three Scottish 18th century poets unfortunately never came into being.

The Charles of Orleans essay appeared in the Cornhill Magazine (December 1876); that on the French poet Villon, with the story on the same theme, A Lodging for the Night, not until the autumn of 1887.

The expression ‘like the seaman’s parrot in the tale’ alludes to the following old fable: a man who noticed one silent parrot amongst a host of talkative ones for sale asked the bird the reason of its silence. He was delighted with its reply, ‘I think the more’; but when he had bought the parrot, he discovered that they were the only words it could say.

Spring was a prose poem, of which the manuscript, sent to Sidney Colvin at Cambridge, was unluckily lost in the confusion of a change of rooms.

The essay on the French poet and musician Béranger (referred to at the end of the letter) was one commissioned and used by the editor of the Encyclopædia Britannica.

The expression ‘Thus conscience (does make cowards of us all)’ alludes to Hamlet’s famous soliloquy.

[As usual, dots between square brackets indicate cuts made by Sidney Colvin. For full, correct and critical edition of this letter, see Mehew 2, 424.]

Thanks for your letter and news. […] No – my Burns is not done yet, it has led me so far afield that I cannot finish it; every time I think I see my way to an end, some new game (or perhaps wild goose) starts up, and away I go. And then, again, to be plain, I shirk the work of the critical part, shirk it as a man shirks a long jump. It is awful to have to express and differentiate Burns in a column or two.

O golly, I say, you know, it can’t be done at the money. All the more as I’m going to write a book about it. Ramsay, Fergusson, and Burns: an Essay (or a critical essay? but then I’m going to give lives of the three gentlemen, only the gist of the book is the criticism) by Robert Louis Stevenson, Advocate. How’s that for cut and dry? And I could write this book. Unless I deceive myself, I could even write it pretty adequately. I feel as if I was really in it, and knew the game thoroughly. You see what comes of trying to write an essay on Burns in ten columns. 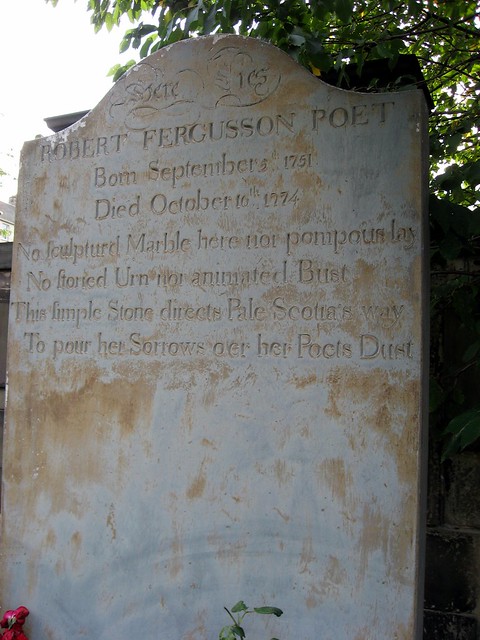 Meantime, when I have done Burns, I shall finish Charles of Orleans (who is in a good way, about the fifth month, I should think, and promises to be a fine healthy child, better than any of his elder brothers for a while);

Charles d’Orleans (1394-1465), remembered as an accomplished poet, owing to the more than 500 extant poems he produced, written in both French and English, during his 25 years spent as a prisoner of war [http://i27.servimg.com/]

and then perhaps a Villon, for Villon is a very essential part of my Ramsay-Fergusson-Burns; I mean, is a note in it, and will recur again and again for comparison and illustration; 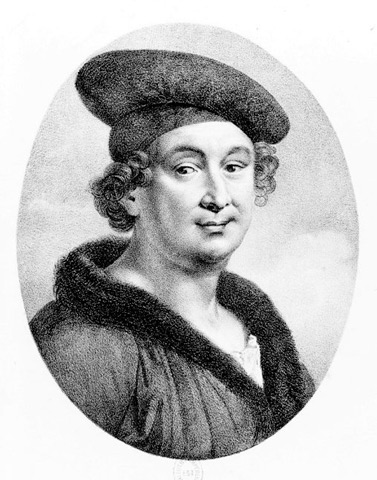 then, perhaps, I may try Fontainebleau, by the way. But so soon as Charles of Orleans is polished off, and immortalised for ever, he and his pipings, in a solid imperishable shrine of R.L.S., my true aim and end will be this little book […]. Suppose I could jerk you out 100 Cornhill pages; that would easy make 200 pages of decent form; and then thickish paper – eh? would that do? I dare say it could be made bigger; but I know what 100 pages of copy, bright consummate copy, imply behind the scenes of weary manuscribing; I think if I put another nothing to it, I should not be outside the mark; and 100 Cornhill pages of 500 words means, I fancy (but I never was good at figures […]), means 50,000 words. There’s a prospect for an idle young gentleman who lives at home at ease! The future is thick with inky fingers. And then perhaps nobody would publish. Ah nom de dieu! What do you think of all this? will it paddle, think you?

I hope this pen will write; it is the third I have tried.About coming up, no, that’s impossible; for I am worse than a bankrupt. I have at the present six shillings and a penny; I have a sounding lot of bills for Christmas; new dress suit, for instance, the old one having gone for Parliament House; and new white shirts to live up to my new profession; I’m as gay and swell and gummy as can be; only all my boots leak; one pair water, and the other two simple black mud; so that my rig is more for the eye, than a very solid comfort to myself. […]

That is my budget. Dismal enough, and no prospect of any coin coming in; at least for months. So that here I am, I almost fear, for the winter; certainly till after Christmas, and then it depends on how my bills ‘turn out’ whether it shall not be till spring. So, meantime, I must whistle in my cage. My cage is better by one thing; I am an Advocate now. If you ask me why that makes it better, I would remind you that in the most distressing circumstances a little consequence goes a long way, and even bereaved relatives stand on precedence round the coffin. I idle finely. I read Boswell’s Life of Johnson, Martin’s History of France, Allan Ramsay, Olivier Bosselin, all sorts of rubbish, à propos of Burns, Commines, Juvénal des Ursins, etc.

One of 29 volumes of Henri Martin’s Histoire de France [http://www.le-livre.fr/] Philippe de Commines (1447-1511), a writer in the courts of Burgundy and France [http://upload.wikimedia.org/]

I walk about the Parliament House five forenoons a week, in wig and gown; I have either a five or six mile walk, or an hour or two hard skating on the rink, every afternoon, without fail. […]

I have not written much; but, like the seaman’s parrot in the tale, I have thought a deal. You have never, by the way, returned me either Spring or Béranger, which is certainly a d-d shame. I always comforted myself with that when my conscience pricked me about a letter to you. ‘Thus conscience’ – O no, that’s not appropriate in this connection. – Ever yours,

I say, is there any chance of your coming north this year? Mind you that promise is now more respectable for age than is becoming.