I envy you your wife, your home, your child – I was going to say your cat

The ‘humorous friend’ was Charles Baxter: RLS stayed the weekend with the Baxters at Lochcote House near Bathgate, now demolished.

Edmund William Gosse used to sign with two initials, E.W.G. The nickname Weg was fastened on him by RLS, partly under a false impression as to the order of these initials, partly in friendly derision of a passing fit of lameness, which called up the memory of Silas Wegg, the immortal literary gentleman ‘with a wooden leg’ of Our Mutual Friend.

A ‘pock-pudding’ is a pudding made in a poke or bag, word used contemptously or humorously in Scotland to describe an Englshman.

[Dots between square brackets indicate cuts made by Sidney Colvin. For full, correct and critical edition of this letter, see Mehew 2, 636.]

Yours was delicious; you are a young person of wit; one of the last of them; wit being quite out of date, and humour confined to the Scotch Church and the Spectator in unconscious survival. You will probably be glad to hear that I am up again in the world; […] I have breathed again, and had a frolic on the strength of it. The frolic was yesterday, Sawbath; the scene, the Royal Hotel, Bathgate; 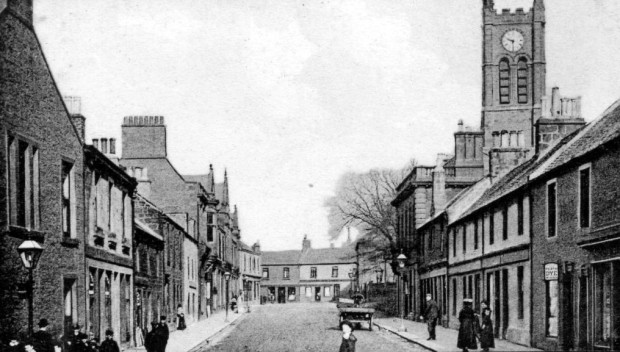 I went there with a humorous friend […] to lunch. The maid soon showed herself a lass of character. She was looking out of window. On being asked what she was after, ‘I’m lookin’ for my lad,’ says she. ‘Is that him?’ ‘Weel, I’ve been lookin’ for him a’ my life, and I’ve never seen him yet,’ was the response. I wrote her some verses in the vernacular; she read them. ‘They’re no bad for a beginner,’ said she. The landlord’s daughter, Miss Stewart, was present in oil colour; so I wrote her a declaration in verse, and sent it by the handmaid. She (Miss S.) was present on the stair to witness our departure, in a warm, suffused condition. Damn it, Gosse, you needn’t suppose that you’re the only poet in the world. […]

Your […] statement about your initials, it will be seen, I pass over in contempt and silence. When once I have made up my mind, let me tell you, sir, there lives no pock-pudding who can change it. Your anger I defy. Your unmanly reference to a well-known statesman I puff from me, sir, like so much vapour. Weg is your name; Weg. WEG.

My enthusiasm has kind of dropped from me. I envy you your wife, your home, your child – I was going to say your cat. There would be cats in my home too if I could but get it.

[…] I may seem to you ‘the impersonation of life,’ […] but my life is the impersonation of waiting, and that’s a poor creature. God help us all, and the deil be kind to the hindmost! Upon my word, we are a brave, cheery crew, we human beings, and my admiration increases daily – primarily for myself, but by a roundabout process for the whole crowd; for I dare say they have all their poor little secrets and anxieties. And here am I, for instance, writing to you as if you were in the seventh heaven, and yet I know you are in a sad anxiety yourself. I hope earnestly it will soon be over, and a fine pink Gosse sprawling in a tub, and a mother in the best of health and spirits, glad and tired, and with another interest in life. Man, you are out of the trouble when this is through. A first child is a rival, but a second is only a rival to the first; and the husband stands his ground and may keep married all his life – a consummation heartily to be desired […]. Good-bye, Gosse. Write me a witty letter with good news of the mistress.