It is a strange affair to be an emigrant, as I hope you shall see in a future work

RLS reached the Pacific Transfer Station near Counsil Bluffs on the eastern bank of the Missouri on Thursday night, 21 August 1879. Here he joined a Union Pacific ‘emigrant train’: left on Friday evening, 22 August, and crossed the Missouri to Omaha, Nebraska; then all Sunday and Monday travelled through Wyoming and then across the Rockies. He was taken ill at Laramie, Wyoming.

Bitter Creek is in SW Wyoming near Rock Springs.

At Ogden, Utah, he changed to the Central Pacific Railroad.

[Dots between square brackets indicate cuts made by Sidney Colvin. For full, correct and critical edition of this letter, see Mehew 3, 647.]

I am sitting on the top of the cars with a mill party from Missouri going west for his health.

Sitting on the top of the cars, Canada [http://www.aehs.ca/]

Desolate flat prairie upon all hands.

Here and there a herd of cattle, a yellow butterfly or two; a patch of wild sunflowers; a wooden house or two; then a wooden church alone in miles of waste; then a windmill to pump water.

When we stop, which we do often, for emigrants and freight travel together, the kine first, the men after, the whole plain is heard singing with cicadae. This is a pause, as you may see from the writing.

What happened to the old pedestrian emigrants, what was the tedium suffered by the Indians and trappers of our youth, the imagination trembles to conceive.

This is now Saturday, 23rd, and I have been steadily travelling since I parted from you at St. Pancras.

It is a strange vicissitude from the Savile Club to this;

I sleep with a man from Pennsylvania who has been in the States Navy, and mess with him and the Missouri bird already alluded to. We have a tin wash-bowl among four. I wear nothing but a shirt and a pair of trousers, and never button my shirt. When I land for a meal, I pass my coat and feel dressed. This life is to last till Friday, Saturday, or Sunday next. It is a strange affair to be an emigrant, as I hope you shall see in a future work. I wonder if this will be legible; my present station on the waggon roof, though airy compared to the cars, is both dirty and insecure. I can see the track straight before and straight behind me to either horizon.

Peace of mind I enjoy with extreme serenity; I am doing right; I know no one will think so; and don’t care. My body, however, is all to whistles; I don’t eat; […] but, man, I can sleep. The car in front of mine is chock full of Chinese.

From China to California [http://herschelian.files.wordpress.com/]

What it is to be ill in an emigrant train let those declare who know. I slept none till late in the morning, overcome with laudanum, of which I had luckily a little bottle. All today I have eaten nothing, and only drunk two cups of tea, for each of which, on the pretext that the one was breakfast, and the other dinner, I was charged fifty cents […]. Our journey is through ghostly deserts, sage brush and alkali, and rocks, without form or colour, a sad corner of the world.

I confess I am not jolly, but mighty calm, in my distresses. My illness is a subject of great mirth to some of my fellow-travellers, and I smile rather sickly at their jests.

We are going along Bitter Creek just now, a place infamous in the history of emigration, a place I shall remember myself among the blackest. I hope I may get this posted at Ogden, Utah. […] Fanciful illustration of Lieutenant Colonel Custer and his troops making their last charge at the Battle of the Little Bighorn, 1876 [ http://upload.wikimedia.org/%5D

Little Bighorn, some months after [http://www.historyplace.com/]

The horse “Comanche”, only survivor at Little Bighorn, 1876 [https://encrypted-tbn0.gstatic.com/] 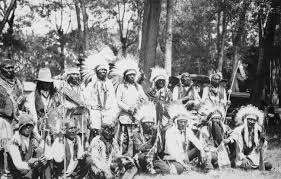 The Jupiter, which carried Leland Stanford (one of the “Big Four” owners of the Central Pacific) and other railway officials to the Last Spike Ceremony, 1869 [http://upload.wikimedia.org/]