Can I make some one happier this day before I lie down to sleep?

The Amateur Emigrant, an account of RLS’s journey to California, was then in draft.

The novel A Vendetta in the West was eventually abandoned and apparently destroyed.

The Pavilion on the Links had just then been accepted for the Cornhill by its editor, Leslie Stephen.

The story on the Prince of Grünewaldwill become later Prince Otto (1885).

Colvin had written proposing that a collected volume of his short stories should be published with illustrations by Caldecott.

The ‘Guitar’ is RLS’s story ‘Providence and the Guitar, first published in London (Nov 1878), and later included in New Arabian Nights (1882).

The ‘Club’ is the Bohemian Club in San Francisco, a private gentlemen’s club, founded in 1872 from a regular meeting of journalists, artists and musicians. Fanny’s former husband, Sam Osbourne, and her son-in-law, Joe Strong, were members of the Club.

The Workingmen’s party of California was then protesting on the vacant ‘sand lots’ in San Francisco against dishonest banking, unjust taxation, the monopoly position of the local railroads and landowners and especially the competition from cheap Chinese labour.

At the end of this letter occurs his first allusion to his now famous Requiem. The first draft of ‘Requiem’ is dated ‘Train August 79’; the final version, with an additional verse is dated ‘1880 Jan S.F.’ (MSS Yale). The verses are to be found on RLS’s tomb.

The Latin expression ‘Nitor aquis’, we know from RLS himself, comes from a translation of An Inland Voyage made by an Eton student some time before. Its meaning could be: “I commit myself to the waters, and could be used on the epitaph perhaps as an allusion to the voyage to the afterlife.

[As usual, dots between square brackets indicate cuts made by Sidney Colvin. For full, correct and critical edition of this letter, see Mehew 3, 690].

I received a very nice letter from you with two enclosures […]. I am still unable to finish the Emigrant, although there are only some fifteen pages to do. The Vendetta is, I am afraid, scarce Fortnightly form, though after the Pavilion being taken by Stephen, I am truly at sea about all such matters.

First proofs of a portion of “The Amateur emigrant” with corrections in the hand of RLS, MS Yale [http://brbl-media.library.yale.edu/]

I dare say my Prince of Grünewald – the name still uncertain – would be good enough for anything if I could but get it done: I believe that to be a really good story.

The Vendetta is somewhat cheap in motive; very rum and unlike the present kind of novels both for good and evil in writing; and on the whole, only remarkable for the heroine’s character, and that I believe to be in it. […]

I am not well at all. But hope to be better. You know I have been hawked to death these last months. And then I lived too low, I fear; and any way I have got pretty low and out at elbows in health. I wish I could say better, but I cannot. With a constitution like mine, you never know – tomorrow I may be carrying topgallant sails again, but just at present I am scraping along with a jurymast and a kind of amateur rudder.

Truly I have some misery, as things go; but these things are mere detail. However I do not want to crever, claquer, and cave in just when I have a chance of some happiness; nor do I mean to. All the same, I am more and more in a difficulty how to move every day […]. What a day or an hour might bring forth, God forbid that I should prophesy. Certainly, do what you like about the stories; Will o’ the Mill or not. It will be Caldecott’s book or nobody’s. […]

I am glad you like the Guitar: I always did: and I think C[aldecott] could make lovely pikters to it: it almost seems as if I must have written it for him express.

I have already been a visitor at the Club for a fortnight; but that’s over, and I don’t much care to renew the period. […] I want to be married, not to belong to all the Clubs in Christendie…

Interior of the Bohemian Club [http://imgc.allpostersimages.com/]

I half think of writing up the Sand-lot agitation for Morley; it is a curious business; were I stronger, I should try to sugar in with some of the leaders: a chield amang ’em takin’ notes; one […], who kept a brothel, I reckon, before she started socialist, particularly interests me. If I am right as to her early industry, you know she would be sure to adore me. I have been all my days a dead hand at a harridan, I never saw the one yet that could resist me […].

“The Chinese Agitation in San Francisco, A Meeting of the Workingmen’s Party on the Sand Lots”, 1880 [http://www.printsoldandrare.com/] 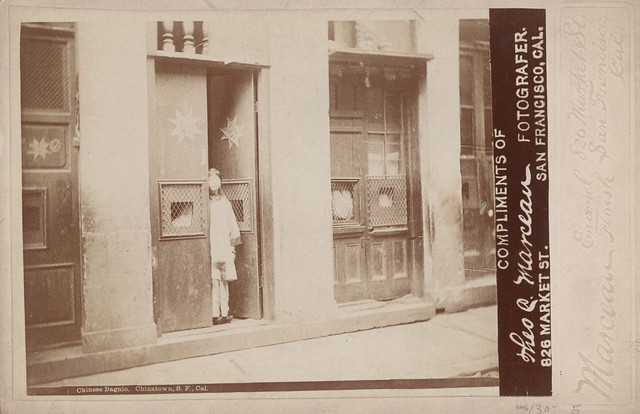 When I die of consumption, you can put that upon my tomb.

Sketch of my tomb follows:

Home is the sailor, home from sea,

And the hunter home from the hill.

You, who pass this grave, put aside hatred; love kindness; be all services remembered in your heart and all offences pardoned; and as you go down again among the living, let this be your question: can I make some one happier this day before I lie down to sleep? Thus the dead man speaks to you from the dust: you will hear no more from him.

Who knows, Colvin, but I may thus be of more use when I am buried than ever when I was alive? The more I think of it, the more earnestly do I desire this. I may perhaps try to write it better some day; but that is what I want in sense. The verses are from a beayootiful poem by me.