Here is the scheme as well as I can foresee

RLS here sketches for his father the plan of the work on Highland history, The Transformation of Scottish Highlands, which they had discussed together in the preceding summer. He sent him long lists of books he needed. The project was eventually abandoned, but he used his research when he came to write his novel Kidnapped (published in 1886).

[Dots between square brackets indicate cuts made by Sidney Colvin. For full, correct and critical edition of this letter, see Mehew 3, 758.]

Here is the scheme as well as I can foresee. I begin the book immediately after the ’15, as then began the attempt to suppress the Highlands.

(2) The Independent Companies: the Watches.

(4) The Military Roads, and Disarmament: Wade and (2) An officer of the Independent Highland Companies in 1743. They were irregular militia raised from the Scottish clans, by order of the Government, 1603-1760, in order to help keep the peace in the Highlands [http://upload.wikimedia.org/]

(3) Lady Grange (1679–1745), wife of a Scottish lawyer with Jacobite sympathies. Her dramatic life has been remembered in poetry, prose and plays [http://upload.wikimedia.org/]

(4) General George Wade (1673-1748): under his command the Military Roads were built to allow Government forces to deploy rapidly to key locations in the Highlands [http://ichef.bbci.co.uk/]

(5) E. Burt’s ‘Letters from a Gentleman in the North of Scotland’, recording first-hand experiences of his time with general Wade in the Highlands [https://ia802606.us.archive.org/]

(3) The Forfeited Estates; including Hereditary Jurisdictions; and the admirable conduct of the tenants.

(3) The Heritable Jurisdictions, 1746, was an Act of the Parliament of Great Britain passed in the aftermath of the Jacobite rising of 1745. It abolished the traditional judicial rights afforded to a Scottish clan chief [http://www.cranntara.org.uk/]

(1) The Ossianic Controversy: Ossian is the narrator and purported author of a cycle of epic poems published by the Scottish poet J. Macpherson from 1760. Contemporary critics were divided about the work’s authenticity [http://upload.wikimedia.org/]

(2) The Reinstatement of the Proprietors.

The Highland Clearances was the forced displacement during the 18-19th centuries of a significant number of people from traditional land tenancies in the Scottish Highlands, where they had practised small-scale agriculture [http://www.scottishrepublicansocialistmovemnt.org/] 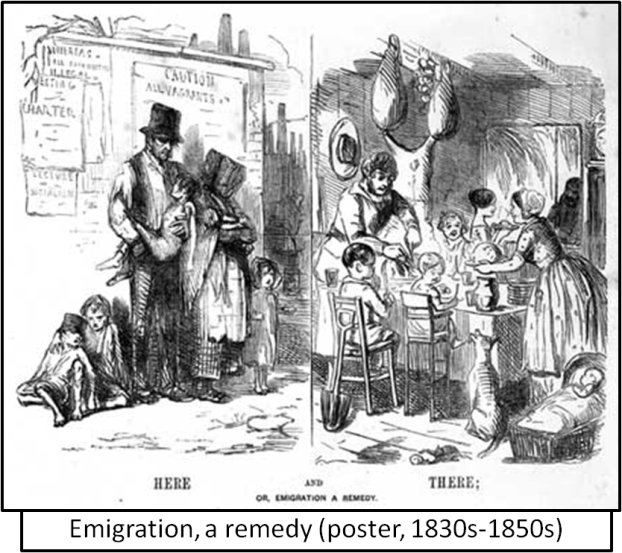 A romanticised early Victorian depiction of a member of Clan MacAlister leaving Scotland for Canada [http://upload.wikimedia.org/]

Timeline of the evolution of the churches of Scotland from the Reformation [http://upload.wikimedia.org/]

All this, of course, will greatly change in form, scope, and order; this is just a bird’s-eye glance. Thank you for Burt, which came, and for your Union notes. I have read one-half (about 900 pages) of Wodrow’s Correspondence, with some improvement, but great fatigue.

Rev. Wodrow’s tombstone: “Erected to the memory of theRev. Robert Wodrow Minister of Eastwood the faithful historian of the sufferings of the Church of Scotland from the year 1660 to 1688… HE BEING DEAD YET SPEAKETH” [http://www.therestorationmovement.com/]

The doctor thinks well of my recovery, which puts me in good hope for the future. I should certainly be able to make a fine history of this.

My Essays are going through the press, and should be out in January or February. – Ever affectionate son,