What fun we could have, if we were all well, what work we could do, what a happy place we could make it for each other!

RLS was reading up for his history book of the Highlands. The project was eventually abandoned, but he used his research when he came to write his novel Kidnapped (published in 1886).

[Dots between square brackets indicate cuts made by Sidney Colvin. For full, correct and critical edition of this letter, see Mehew 3, 765.]

Thanks for yours; I waited, as said I would. I now expect no answer from you, regarding you as a mere dumb cock-shy, or a target, at which we fire our arrows diligently all day long, with no anticipation it will bring them back to us.

We are both sadly mortified you are not coming, but health comes first; alas, that man should be so crazy. What fun we could have, if we were all well, what work we could do, what a happy place we could make it for each other! If I were able to do what I want; but then I am not, and may leave that vein.

No. I do not think I shall require to know the Gaelic; few things are written in that language, or ever were; if you come to that, the number of those who could write, or even read it, through almost all my period, must, by all accounts, have been incredibly small. Of course, until the book is done, I must live as much as possible in the Highlands, and that suits my book as to health.

It is a most interesting and sad story, and from the ’45 it is all to be written for the first time. This, of course, will cause me a far greater difficulty about authorities; but I have already learned much, and where to look for more. One pleasant feature is the vast number of delightful writers I shall have to deal with: Burt, Johnson, Boswell, Mrs. Grant of Laggan, Scott.

Edward Burt (d. 1755) was a Scottish military engineer and author of ‘Letters from a Gentleman in the North of Scotland’, recording his time with general Wade in the Highlands, under whose command the Military Roads were built to allow Government forces to deploy rapidly to key locations in the Highlands [https://ia802606.us.archive.org/]

There will be interesting sections on the Ossianic controversy and the growth of the taste for Highland scenery. 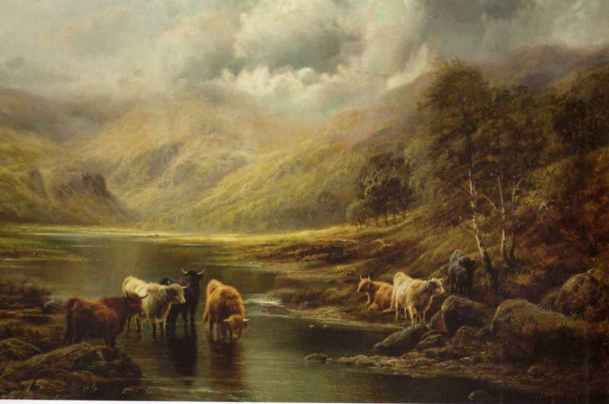 I have to touch upon Rob Roy, Flora Macdonald, the strange story of Lady Grange, the beautiful story of the tenants on the Forfeited Estates, and the odd, inhuman problem of the great evictions.

Rachel Chielsy, Lady Grange (1679–1745), wife of a Scottish lawyer with Jacobite sympathies. Her dramatic life has been remembered in poetry, prose and plays. By J.B. Medina, c. 1710 [http://upload.wikimedia.org/]

The Emigrants Statue commemorates the flight of Highlanders during the clearances, Helmsdale [http://upload.wikimedia.org/]

The religious conditions are wild, unknown, very surprising. And three out of my five parts remain hitherto entirely unwritten. Smack! – Yours ever […]