I take my walks abroad, witching the world

[As usual, dots between square brackets indicate cuts made by Sidney Colvin. For full, correct and critical edition of this letter, see Mehew 3, 838.]

The Cottage, Castleton of Braemar [Mid-August 1881].

Well, I have been pretty mean, but I have not yet got over my cold so completely as to have recovered much energy. It is really extraordinary that I should have recovered as well as I have in this blighting weather; the wind pipes, the rain comes in squalls, great black clouds are continually overhead, and it is as cold as March. 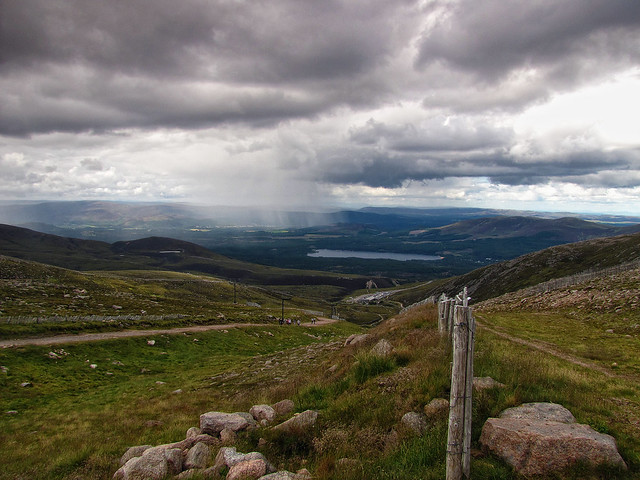 Rain on the Cairngorms, near Braemar [https://farm7.staticflickr.com/]

The country is delightful, more cannot be said; it is very beautiful, a perfect joy when we get a blink of sun to see it in. The Queen knows a thing or two, I perceive; she has picked out the finest habitable spot in Britain.

A blink of sun on the Cairngorms [http://1.bp.blogspot.com/] I have done no work, and scarce written a letter for three weeks, but I think I should soon begin again; my cough is now very trifling. I eat well, and seem to have lost but little flesh in the meanwhile. I was wonderfully well before I caught this horrid cold. I never thought I should have been as well again; I really enjoyed life and work; and, of course, I now have a good hope that this may return.

I suppose you heard of our ghost stories. They are somewhat delayed by my cold and a bad attack of laziness, embroidery, etc., under which Fanny had been some time prostrate. It is horrid that we can get no better weather. […] I did not get such good accounts of you as might have been.

You must imitate me. I am now one of the most conscientious people at trying to get better you ever saw. I have a white hat, it is much admired; also a plaid, and a heavy stoop; so I take my walks abroad, witching the world.

King Henry IV: the words ‘witching the world’ are an echo of Shakespeare’s Henry IV, IV. I. 110 (?And witch the world with noble horsemanship’ [http://2.bp.blogspot.com/]

Last night I was beaten at chess, and am still grinding under the blow. […] Ever your faithful friend,