It looks like a kind of lamplit vicious fairyland behind me

Thomson and Johnson were joke characters created by RLS and Baxter when they they were students at the university of Edinburgh.

[Dots between square brackets indicate cuts made by Sidney Colvin. For full, correct and critical edition of this letter, see Mehew 3, 885.]

[…] We have been in miserable case here; my wife worse and worse; and now sent away with Lloyd for sick nurse, I not being allowed to go down. I do not know what is to become of us; and you may imigine how rotten I have been feeling, and feel now, alone with my weasel-dog and my German maid, on the top of a hill here, heavy mist and thin snow all about me, and the devil to pay in general. I don’t care so much for solitude as I used to; results, I suppose, of marriage.

Pray write me something cheery. A little Edinburgh gossip, in Heaven’s name. Ah! what would I not give to steal this evening with you through the big, echoing, college archway, and away south under the street lamps, and away to dear Brash’s, now defunct!

In Edinburgh university years, Brash & Son, wine and spirit merchants of 44 Clerk Street, Edinburgh, had been a special butt for some of the youthful pranks of RLS and his friends.

But the old time is dead also, never, never to revive. It was a sad time too, but so gay and so hopeful, and we had such sport with all our low spirits and all our distresses, that it looks like a kind of lamplit [vicious] fairyland behind me. O for ten Edinburgh minutes – sixpence between us, and the ever-glorious Lothian Road, or dear mysterious Leith Walk! But here, a sheer hulk, lies poor Tom Bowling; here in this strange place, whose very strangeness would have been heaven to him then; and aspires, yes, C.B., with tears, after the past.

See what comes of being left alone. Do you remember Brash? […] the sheet of glass that we followed along George Street? 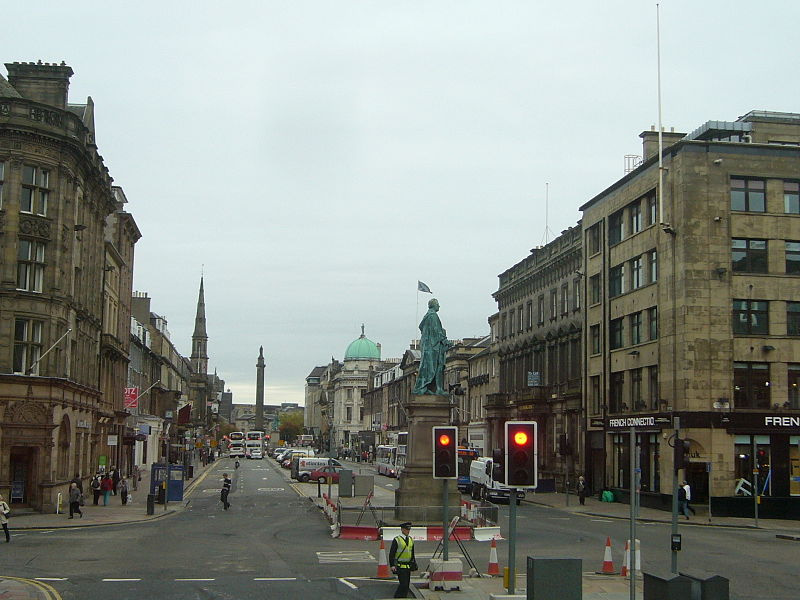 Here is the George Street anecdote, reported by biographers: Baxter and RLS were proceeding along George Street on their way to college when they met 6 men carrying on their shoulders a large sheet of glass, rolled in a dark cloth. The men were moving with great care and gravity, and the effect was like that of a funeral procession. This struck RLS as irresistibly comic, so the two friends, lifting off their hats and wih downcast visage, fell into line as chief mourners [https://s.yimg.com/]

The Granton Hotel anecdote, as narrated by RLS himself: “Baxter and I were at the Public Room at the Granton Hotel when 3 serious-looking youngish men came in and sat down to dinner. The dish was taken off and they were beginning to help it when I strode across the room took my position at the empty side of their table and remarking firmly that I would allow nobody to eat like heathen in my presence, inflicted upon them a prodigiously long grace. The man who was opposite to me looked at me severely – ‘Perhaps you are not aware, Sir, that I am a missionary from Aberdeen,’ said he. Charles leaped at him – ‘All my life I have been longing to meet a missionary from Aberdeen,’ he cried in an ecstasy. Needless to say that we brought our glasses over and made a merry afternoon of it all five.” Former Granton Hotel, Edinburgh [http://canmoremapping.rcahms.gov.uk/]

the night at Bonny mainhead?

Arthur’s Seat seen from the old Burgh Muir: Mehew reads ‘Bonny mainhead’ as ‘Barrymuirhead’, ‘Boroughmuir’ or ‘Burghmuir’, an area to the South of Edinburgh [http://upload.wikimedia.org/]

the compass near the sign of the Twinkling Eye? the night I lay on the pavement in misery?

I swear it by the eternal sky

Johnson – nor – Thomson ne’er shall die!

Yet I fancy they are dead too; dead like Brash.