It is time I sufficed for myself indeed. And I believe I can

The names listed at the beginning of this letter are used by RLS to mask his friends, as they were sketched in his essay ‘Talk and Talkers’, just then drafted (publ. 1887).

[As usual, dots between square brackets indicate cuts made by Sidney Colvin. For full, correct and critical edition of this letter, see Mehew 3, 945.]

But pray regars these as secrets.

Professor Fleeming Jenkin (1833-1885) exercised a great influence over the younger RLS, who wrote about him in ‘Talk and Talkers’: “Cockshot is a different article, but vastly entertaining, and has been meat and drink to me for many a long evening. His manner is dry, brisk and pertinacious, and the choice of words not much”. [http://histel.com/]

RLS’s cousin, Robert Alan Mowbray Stevenson (Bob) (1847-1900), artist and later Professor of Fine Arts at University College, Liverpool, was one of the best conversationalists in England. RLS wrote about him in ‘Talk and Talkers’: “The very best talker, with me, is one whom I shall call Spring-Heel’d Jack. I say so, because I never knew anyone who mingled so largely the possible ingredients of converse”. [http://stevensonmuseum.org/]

RLS’s friend, the poet William Ernest Henley (1849-1903) had a robust personality, in contrast with his health, and in his writings and talk he delighted in shocking people. RLS wrote about him in ‘Talk and Talkers’: “Burly is a man of great presence; he commands a larger atmosphere, gives the impression of a grosser mass of character than most men”. [http://robert-louis-stevenson.org/]

Sir Walter Grindlay Simpson (1843-1898), was RLS’s companion on the “Inland Voyage”. RLS wrote about him in ‘Talk and Talkers’: “Athelred… presents you with the spectacle of a sincere and somewhat slow nature thinking aloud”. [http://robert-louis-stevenson.org/] 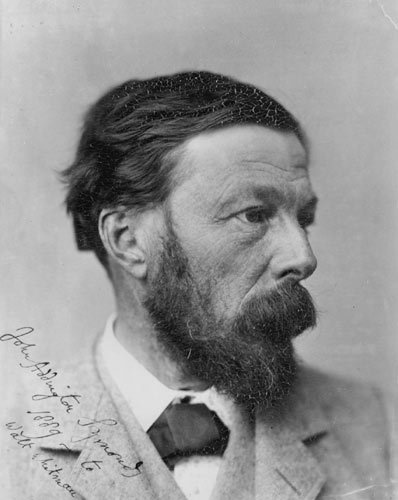 John Addington Symonds (1840-1893). writer and art critic, was afflicted with lung trouble, and spent much of his time at Davos. RLS wrote about him in ‘Talk and Talkers’: “His [Opalstein’s] various and exotic knowledge, complete although unready sympathies, and fine, full, discriminative flow of language, fit him out to be the best of talkers…” [https://s.yimg.com/]

Edmund Gosse (1849-1928), poet and critic. RLS wrote about hin in ‘Talk and Talkers’: “I prefer my Purcel in his second character, when he unbends into a strain of graceful gossip, singing like the fireside kettle”. [www.esacademic.com/]

My dear mother, how can I keep up with your breathless changes? Innerleithen, Cramond, Bridge of Allan, Dunblane, Selkirk. I lean to Cramond, but I shall be pleased anywhere, any respite from Davos; never mind, it has been a good, though a dear lesson. Cramond, on the outskirts of suburban Edinburgh [https://s-media-cache-ak0.pinimg.com/]

Now, with my improved health, if I can pass the summer, I believe I shall be able no more to exceed, no more to draw on you. It is time I sufficed for myself indeed. And I believe I can.

I am still far from satisfied about Fanny; she is certainly better, but it is by fits a good deal, and the symptoms continue, which should not be. I had her persuaded to leave without me this very day (Saturday 8th), but the disclosure of my mismanagement broke up that plan; she would not leave me lest I should mismanage more. I think this an unfair revenge; but I have been so bothered that I cannot struggle. All Davos has been drinking our wine. During the month of March, three litres a day were drunk – O it is too sickening – and that is only a specimen. It is enough to make any one a misanthrope, but the right thing is to hate the donkey that was duped – which I devoutly do.

I have this winter finished Treasure Island, written the preface to the Studies, a small book about the Inland Voyage size, The Silverado Squatters, and over and above that upwards of ninety (90) Cornhill pages of magazine work. No man can say I have been idle. – Your affectionate son,