I believe in playing dark with second and third-rate work

RLS was beginning to realise that work at play-writing in collaboration with Henley was doing much more to exhaust his strength than to replenish either of their purses, and Henley, who had built hopes of fame and fortune on their collaboration, was very unwilling to face the fact.

The verb gober is French for to have a strong liking for, to think no end of (se gober, to be self-conceited).

[As usual, dots between square brackets indicate cuts made by Sidney Colvin. For full, correct and critical edition of this letter, see Mehew 5, 1422.]

About coming down, you cannot get into us for a while, as you may imagine; we are in desperate vortex, and everybody most dead. I have been two days in bed with liver and slight bleeding.

This expectorant claimed to cure all sorts of things, including the “spitting of blood”, 1858 [http://scontent.cdninstagram.com]

Do you think you are right to send Macaire and the Admiral about?

Not a copy have I sent, nor (speaking for myself personally) do I want sent. The reperusal of the Admiral, by the way, was a sore blow; eh, God, man, it is a low, black, dirty, blackguard, ragged piece: vomitable in many parts – simply vomitable. Pew is in places a reproach to both art and man.

In ‘Treasure Island’ Pew was the evil blind beggar who is accidentally trampled to death by the horses of revenue officers riding to assist Jim Hawkins. In the play ‘Admiral Guinea’, RLS gives him the full name “David Pew”. And his next novel ‘Kidnapped’ will also feature a dangerous blind man [http://flashbak.com]

But of all that afterwards. What I mean is that I believe in playing dark with second and third-rate work. Macaire is a piece of job-work, hurriedly buckled; might have been worse, might have been better; happy-go-lucky; act it or-let-it-rot piece of business. Not a thing, I think, to send in presentations. Do not let us gober ourselves – and, above all, not gober dam pot-boilers – and p[ot] b[oiler]’s with an obvious flaw and hole in them, such as is our unrealised Bertrand in this one. But of this also, on a meeting.

I am not yet done with my proofs, I am sorry to say; so soon as I am, I must tackle Kidnapped seriously, or be content to have no bread, which you would scarcely recommend. 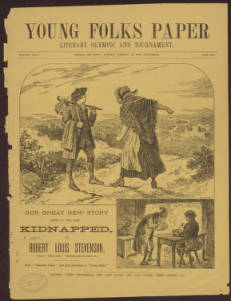 RLS’s novel began to be serialized next June. He wrote to his father its title page: “Memoirs of the Advntures of David Balfour; how he was kidnapped and cast away in the brig Covenant of Dysart; his journey in the wild Highlands; his acquaintance with Alan Breck Stewart and the sons of the notorious Rob Roy; with all that he suffered at the hands of his uncle Ebenezer Balfour of Shaws, wrongly so called: written by himself and now first set forth etc.” [http://digital.tcl.sc.edu]

It is all I shall be able to do to wait for the Young Folk money, on which I’ll have to live as best I can till the book comes in.

Plays at that rate I do not think I can possibly look at before July; so let that be a guide to you in your views. July, or August, or September, or thereabouts: these must be our times, whichever we attack. I think you had better suspend a visit till we can take you in and till I can speak. It seems a considerable waste of money; above all, as just now I could not even offer you meals with my woman in such a state of overwork. My father and mother have had to go to lodgings. – Post.