I know not the day; but the month it is the drear

October by the ghoul-haunted woodland of Weir. 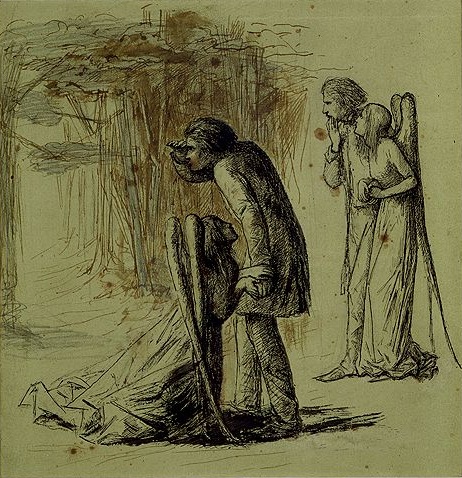 This is to say First, the voyage was a huge success. We all enjoyed it (bar my wife) to the ground: sixteen days at sea with a cargo of hay, matches, stallions, and monkeys, and in a ship with […] no style on, and plenty of sailors to talk to, and the endless pleasures of the sea − the romance of it, the sport of the scratch dinner and the smashing of crockery, the pleasure − an endless pleasure − of balancing to the swell: well, it’s over. 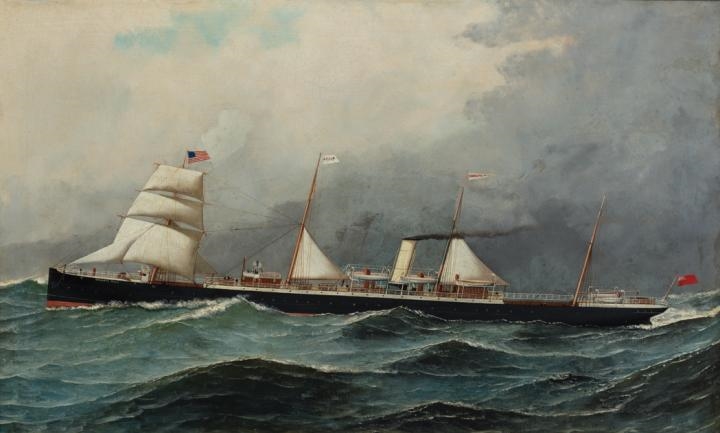 Second, I had a fine time, rather a troubled one, at Newport and New York; saw much of and liked hugely the Fairchilds, St. Gaudens the sculptor, Gilder of the Century

John White Alexander (1856-1915), American painter, had been commissioned by the Century to make a portrait of RLS during the author’s staying at Bournemouth [https://upload.wikimedia.org]

RLS’s portrait by Alexander was reproduced in the Century for April 1888 with Henry James’s essay [http://ebooks.library.cornell.edu]

− saw a lot of my old and admirable friend Will Low, whom I wish you knew and appreciated

− was medallioned by St. Gaudens,

and at last escaped to Third, Saranac Lake, where we now are, and which I believe we mean to like and pass the winter at. 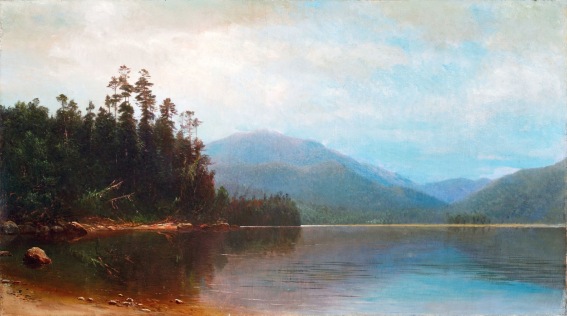 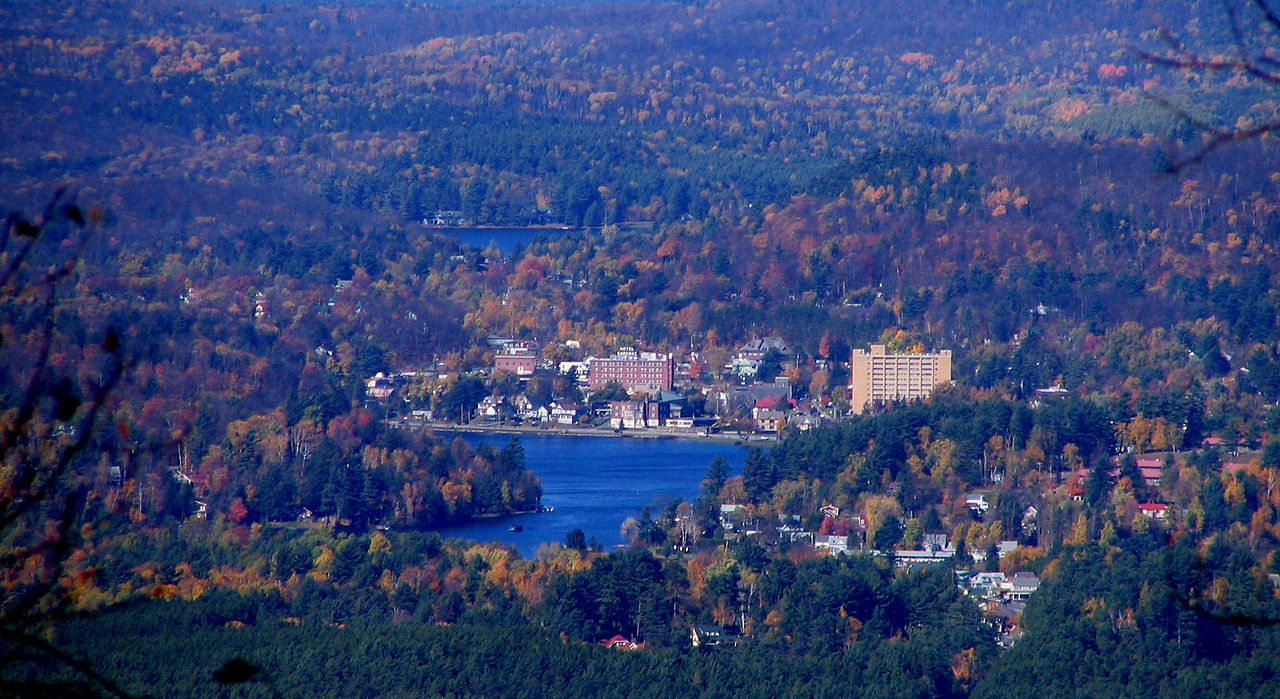 The Stevensons had rented part of the house of the guide Andrew Baker, built of wooden boards, painted white, with green shutters, and a verandah round it. The house is now preserved as the Stevenson Museum [www.hippostcard.com] 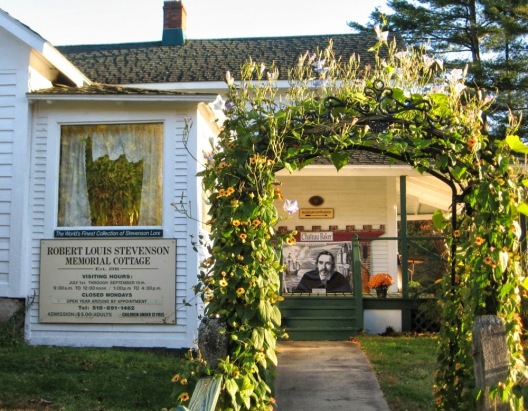 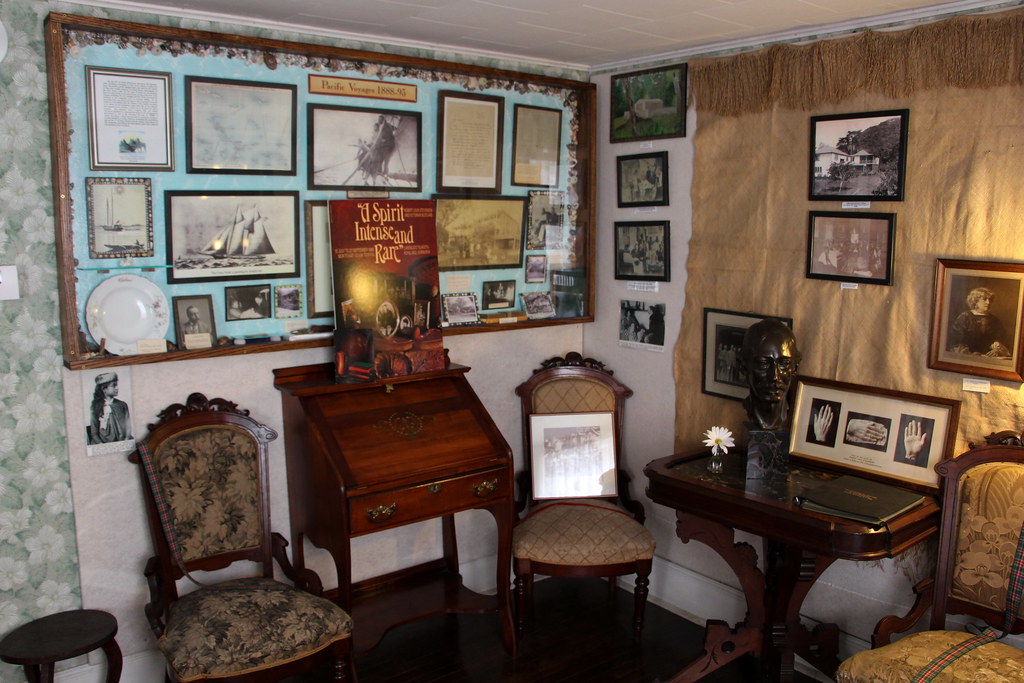 − is on a hill, and has a sight of a stream turning a corner in the valley − bless the face of running water! − and sees some hills too, and the paganly prosaic roofs of Saranac itself; the Lake it does not see, nor do I regret that; I like water (fresh water I mean) either running swiftly among stones, or else largely qualified with whisky. As I write, the sun (which has been long a stranger) shines in at my shoulder; from the next room, the bell of Lloyd’s typewriter makes an agreeable music as it patters off (at a rate which astonishes this experienced novelist) the early chapters of a humorous romance; 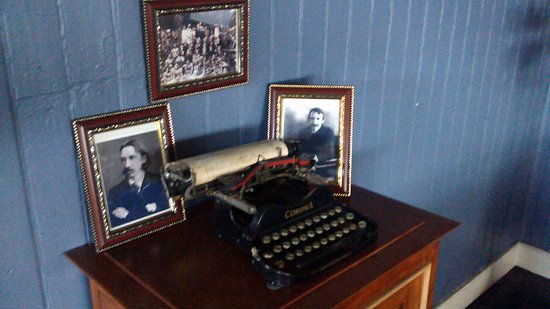 The story was first called ‘The Finsbury Tontine’, then ‘A Game of Bluff’, and finally became ‘The Wrong Box’, 1889.

from still further off − the walls of Baker’s are neither ancient nor massive − rumours of Valentine about the kitchen stove come to my ears; of my mother and Fanny I hear nothing, for the excellent reason that they have gone sparking off, one to Niagara, one to Indianapolis.

Valentine Roch with another maid, Lloyd Osbourne, Fanny and RLS at Baker’s. Fanny had left to visit her mother and sister Josephine Thomas at Danville, Indiana. RLS’s mother accompanied her as far as Niagara [http://robert-louis-stevenson.org]

People complain that I never give news in my letters. I have wiped out that reproach.

But now, Fourth, I have seen the article;

Henry James’s article on RLS finally appeared in the Century for April 1888 and was reprinted the same year in James’s ‘Partial Portraits’ [http://ebooks.library.cornell.edu]

and it may be from natural partiality, I think it the best you have written. O − I remember the Gautier, which was an excellant performance; and the Balzac, which was good;

James’s articles on Gautier and Balzac were published in ‘French Poets and Novelists’, 1878.

James’s article on Daudet was published in the Century for August 1883 [http://ebooks.library.cornell.edu]

over which I licked my chops; but the R.L.S. is better yet. It is so humorous, and it hits my little frailties with so neat (and so friendly) a touch; and Alan is the occasion for so much happy talk, and the quarrel is so generously praised.

James’s article on RLS in the Century: “‘Alan Breck, in Kidnapped, is a wonderful picture…” [http://ebooks.library.cornell.edu]

James’s article on RLS in the Century: “‘Such a scene as the episode of the quarrel of the two men…” [http://ebooks.library.cornell.edu]

I read it twice, though it was only some hours in my possession; and Low, who got it for me from the Century, sat up to finish it ere he returned it; and, sir, we were all delighted. Here is the paper out, nor will anything, not even friendship, not even gratitude for the article, induce me to begin a second sheet; so here, with the kindest remembrances and the warmest good wishes, I remain, yours affectionately,